As the dust over the final governorship battle between Godwin Obaseki and Osagie Ize-Iyamu settles, analysis by TheCable gives some interesting insight into the importance of Adams Oshiomhole in the entire run of play.

The data suggest that Oshiomhole, the former governor of Edo state, was inconsequential in the 2016 and 2020 gubernatorial poll in the state — or equally consequential.

The former national chairman of the All Progressives Congress (APC) supported Godwin Obaseki in 2016. At the time, Obaseki won 13 local government areas (LGAs) in the state, defeating Ize-Iyamu, who recorded victories in only five of 18 LGAs.

Ahead of the 2020 poll, Oshiomhole dumped his protege and incumbent governor of the state, Obaseki, to support his old foe, Ize-Iyamu. He said repeatedly that Obaseki was a mistake he made in 2016.

“I have made my honest mistakes. Only God is perfect. I am now 68 years old. I have come to apologise for the mistake of supporting Obaseki in 2016. I am in Edo State to repair my mistakes,” Oshiomhole had said.

Oshiomhole pitched his tent with Ize-Iyamu and said Edo people were going to “punish” Obaseki on September 19.

“Obaseki has abused the trust of Edo people. With our permanent voter cards, we shall punish Obaseki on September 19. Ize-Iyamu will not repeat the mistakes of Obaseki. Ize-Iyamu will take Edo State to the next level,” he added.

The former labour union chairman appealed to key stakeholders to support “Pastor Ize-Iyamu, a man of God, who will ensure good governance”.

At the end of the election, Ize-Iyamu lost. In the same manner he lost in 2016; losing 13 local governments to his political rival, Obaseki. Like 2016, he won in only five LGAs.

Here are the constants: Any side Obaseki is on, wins. Any party with Ize-Iyamu as flagbearer loses. The winner gets 13 LGAs, the loser gets only five LGAs. It did not matter what side Oshiomhole was on, the winners and losers remained the same.

It should also be noted that the data also showed that Oshiomhole may have also had some impact on the elections — albeit negatively. In 2016 Ize-Iyamu polled 41.28 percent of total votes. This gave him 253,173 votes. In 2020, with Oshiomhole in his ship, he could not pull the same numbers.

This time, he polled 223,619 votes — recording almost a percentage point decline in his popularity. These data could be interpreted in diverse manners, but one thing is clear, he still had the same kind of appeal he had in 2016.

Obaseki’s numbers dropped by about 12,000 votes, but the data suggests his appeal was the same across both elections; he secured over 300,000 votes and won 13 LGAs. 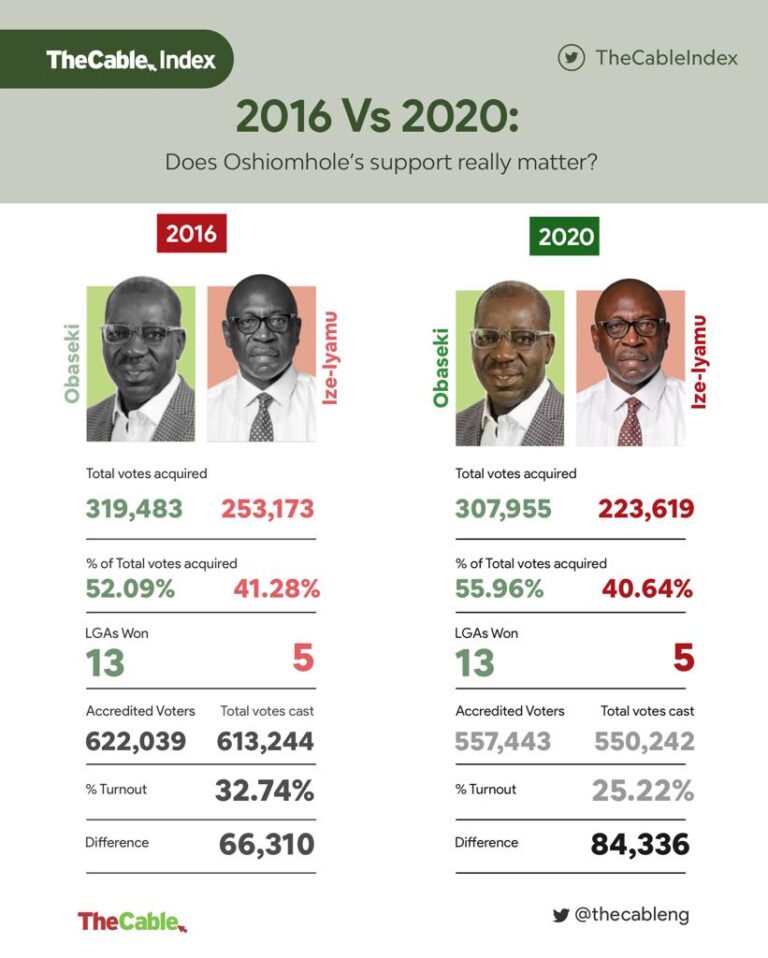 While this election was closely contested in the state, the voters were not as enthusiastic at casting their votes as they did in 2016. Before the lights came on, over 480,000 voters had refused to pick up their permanent voter cards (PVCs).

Precisely, 1,176,496 people with PVCs refused to vote on election day. The minority decided who runs the state for the next four years.

Voter apathy has become a recurring decimal across national and sub-national elections in Nigeria. This election only reinforced this position.

Would the Independent National Electoral Commission (INEC) be doing anything about voter apathy? Your guess is better than ours.